: Being protected from harm and neglect

NB: Click on the images in each section to see larger versions

Rules around the school site 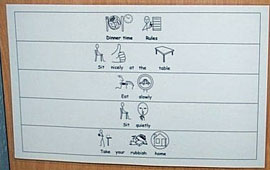 Symbolising rules for pupils who are not able to read text enables them to understand what is expected in a range of situations. The visual clue helps them to remember what the rules are. Staff teach them the symbols initially. Dinner time rules and Fire Drill rules both focus on aspects of safety within school.

Rules in a Small Group 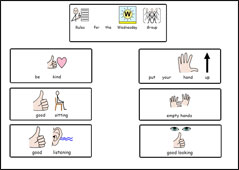 A weekly social interaction group for 6 Year 5 pupils with communication difficulties needed symbolised 'rules' so all members of the group understood. The rules were put on the group's display board. At the beginning of each session the member of staff reminded the group about them. After a few weeks the two target pupils were self monitoring their own behaviour as well as pointing out when other group members were not following the rules.

These rules were set up to support a pupil who was finding it very difficult not to react aggressively in the playground when he felt angry about something that had happened. This was a particular problem at lunchtime when the break was longer. The 'rules' were initially agreed with the pupil and the mid-day supervisor so everyone involved had ownership. At the beginning of each lunchtime the mid-day supervisor went over the rules with the pupil. Over half a term the number of angry outbursts reduced and because of this agreed routine the situation was easier for the adults to manage. The visual support and consistency of approach also made it easier for the pupil to understand and accept the 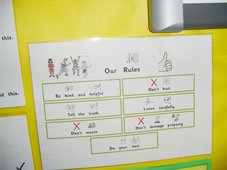 Left) Playtime rules for Key Stage 2 pupils. Mid day supervisors would go over these rules with some pupils at the beginning of each lunchtime play. The symbols act as a good reminder of what is expected, and what to do if you are unhappy. Some sites have rules displayed outside. Others laminate small copies so staff can have then in their pockets for easy access.

Right) Rules for a Year 1 class which were discussed and agreed by all.

Oak Wood Primary and Secondary Special School have used symbols widely around their school site. This enables all their students to understand the school rules, and other general school information.

Rules for the Taxi

Many pupils have to spend a long time at the beginning and end of the school day travelling in a taxi. Sometimes this can cause friction and result in behaviour which is not safe. The image below shows visual support developed for a group of four pupils who had such a taxi journey. They often 'fell out' with each other during the ride and this system of rules and reward helped to solve some of the problems! The rules were symbolised so that everyone knew them: empty hands, good sitting, talk quietly, good listening and be kind. Each day the escort would report to staff on the previous days behaviour and pupils would get a tick for doing the right thing. The chart at the bottom has three zones, gold, silver and red. Each pupil has a picture of themselves on a little taxi. The taxi moved up or down the zones depending on good or bad behaviour. Pupils who were in the gold zone for a whole week had a reward.

Feeling comfortable in the environment 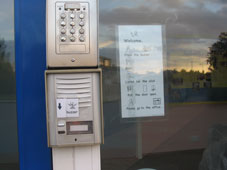 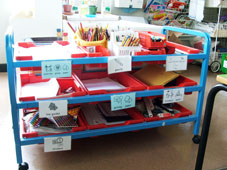 Schools and settings can make their sites 'Communication Friendly' by having colour coded maps to help people find their way round and by symbolising any instructions such as how to get in the front door. Equipment in classrooms can be labelled using symbols and words so pupils can resource themselves independently - Section on CFE

Having the confidence to speak up 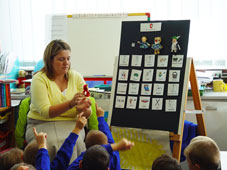 Teachers found that having symbol cards as prompts, children who were normally reluctant to speak up, were much happier making a positive contribution in a group situation. 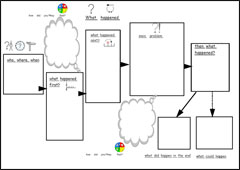 Giving pupils a method of explaining something that has happened to them in a visual way. This was set up to try to help pupils who were getting into trouble in class and in the playground because they were responding inappropriately, to go over what had happened with an adult. The pupil or the adult can draw or write in the boxes. There are thought bubbles to comment on feelings. It also enables discussion about how another reaction may have produced a different outcome. 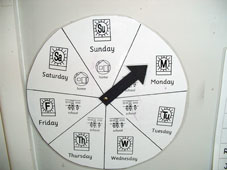 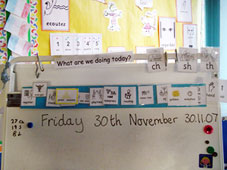 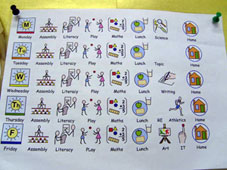 There are many ways to support pupils understand the daily routine. Understanding 'what will happen next' often reduces anxiety and frustration.

Feeling safe in the Learning Environmen 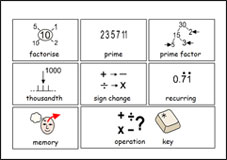 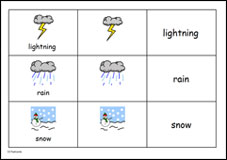 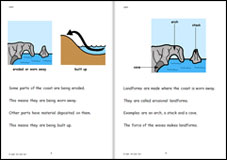